Even if we are more inclined to associate him with the independent music scene, singer and songwriter Steven Morrys has what it takes to do much more. This talented artist has been performing on all sorts of stages for years. At the German Rock & Pop Awards, he didn’t just receive multiple nominations; he was actually among the top three pop singers and won an award for the best English song.

Following a number of publications that were only released digitally, Steven Morrys launched his first studio album “Debüt” in both a digital and a physical format on 1st November 2013. He also released the EP “Songs About Life” that contains only the english language Songs and is available in all Download and Streaming-Portals. And although the album is creating an image for him at the moment, his next release also reveals facets and nuances of his musicality that we haven’t seen before.

"Happy New Year" is the title of his new song and is expected to be a hit. Written in English and Spanish, it is a catchy, rousing and motivational song - the international community can dance and party to, and simply puts listeners in a good mood.

We’re all familiar with the Christmas hits that make an appearance every year like “Last Christmas” and “Feliz Navidad”, and the New Year regulars like “The Final Countdown” and ABBA’s “Happy New Year”. “Feliz Navidad” in particular is a prime example of a successful world hit that works year after year at Christmas time. So far nobody has been able to produce an appropriate song to mark New Year, however. With all due respect, but the group wearing evening dress while gathered round the grand piano, ABBA’s number tugs at the heartstrings and has nothing to do with people’s celebratory mood across the globe. And the only reason “The Final Countdown” is played at New Year is its title. Apart from that, this song doesn’t have anything that even comes close to capturing the spirit of the occasion. In other words, THE New Year hit doesn’t exist. Steven Morrys says, “People want to start the new year in a positive mood, they want to be happy, sing, dance, and celebrate with all the people in this world.”

And this is precisely why he has written and produced a New Year hit in cooperation with Frank Steiner jr. from Teningen-Heimbach, Germany. So is it a little Spanish, Cuban, or more Brazilian perhaps? Is it coupled with a dance floor bass drum, Samba de Janeiro or maybe DJ Bobo? No, it’s none of any of those, and yet it has a bit of everything. It’s an international party hit that’s simply meant to help people to have fun and look forward to the new year. A brilliant party hit for everyone as they celebrate the fast-approaching turn of the year. Happy New Year! 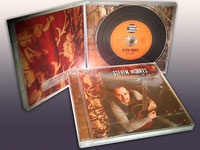